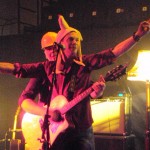 In England in 1998 Ed Case Conway teamed up with Martin Dale to form a duo hell bent on bringing the right kind of madness into the pub music scene. They developed a show consisting of horse races, cucumber fights, keep fit routines, ritual dog drowning, death-defying feats, a bit of Irish folk music and more hats than you could shake a beaver at. Within a year the calendar was bursting at the seams, and soon they developed into a band with Tim Hubball (bass) and Bebee (drums) joining as The Rhythm Maniacs, drove thousands of miles to hundreds og gigs, released 3 cd’s, played in all kinds of venues in the UK, Poland and Denmark, and ended up with a loyal and slightly unhinged following. Every now and then they get together and relive the wild days of their youth